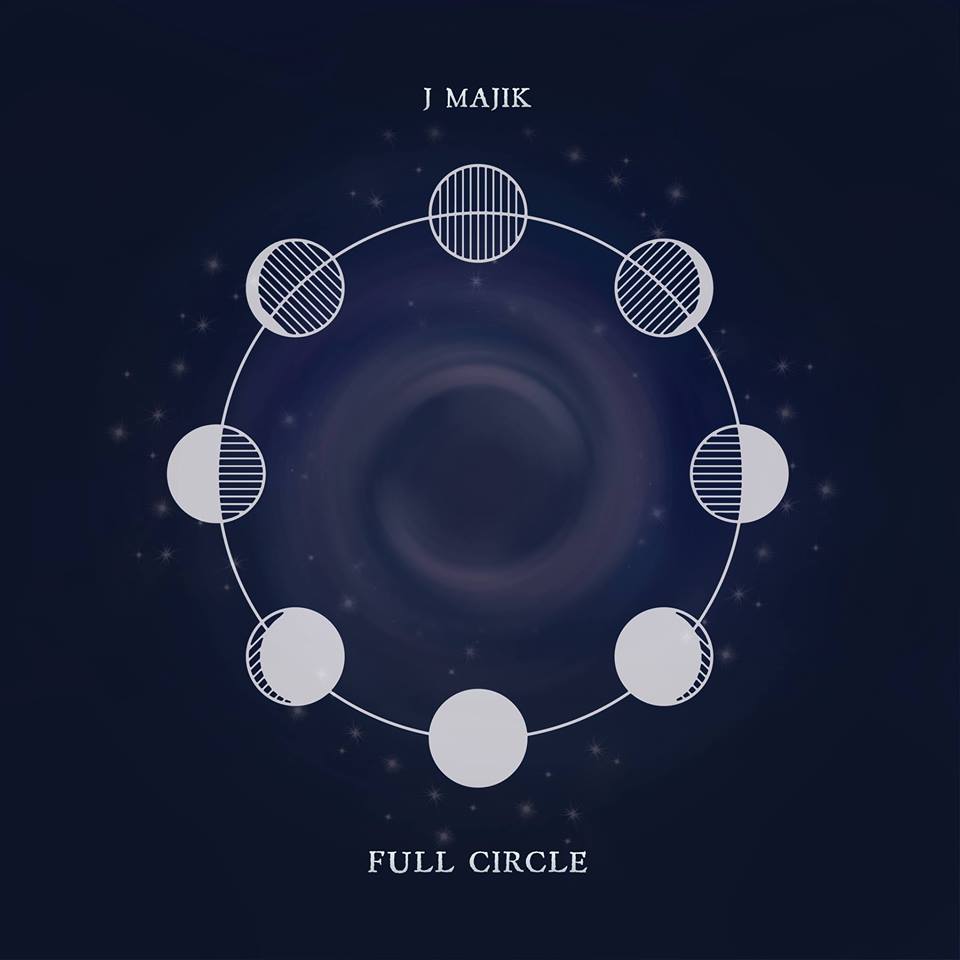 When it comes to legends of the drum & bass/jungle scene, they don’t get much bigger than this man. With his first release coming on Lemon D’s Planet Earth Records at the unbelievable age of just 14, it’s no wonder the boy once known as Dexxtrous went on to become the household name of jungle that is J Majik. A string of massive releases throughout the 90’s on Goldie’s Metalheadz, as well as his own imprint Infrared Records, cemented J Majik’s position in the dance music history books before the turn of the century. Now, 22 years after the release of his first and only album, James returns with the 10 track masterpiece ‘Full Circle’. We caught up with the man himself to have a little chat about the past, present and future of J Majik.

So it’s been 22 years since we’ve seen an album from J Majik and I read that this new project was inspired by a set you played at Rupture! Were there any other factors led to the new album?

Yes 22 years since my last solo album, it feels like half that time honestly. I have always enjoyed making all styles of dnb but for me the early 90s was the golden era where music seemed timeless and I feel creatively you can go anywhere on a record. In 2016, a good friend of mine Lee Harmony and myself set up a label called Deep Jungle to put out unreleased gems from the 90s that have never seen the light of day. We began going through all our old DATs and contacting some of the biggest names who were responsible for a lot of the early classics. Coincidentally, Mantra who runs the Rupture nights got in touch and asked if I would play a jungle set at Rupture in 2017. Seeing that reaction at the club; I guess it took me back to the mid 90s and gave me a new inspiration to get back into the studio and just make music I love.

Those early 90’s sounds that are engraved into the album are present straight from the off with ‘Serenity’, whose intro comprises a beautiful combination of atmospheric tones and a drum break that’s brimming with energy. The deep flexing bass line joins everything together to create a fast paced, yet silky smooth journey for the listener.

On the flip side, ’Hold You’ possesses a slightly darker vibe, which is present throughout the track. From the longing cry of the old school style pitched up vocal sample to the stuttering snares and exceedingly heavy sub bass stabs, all of the elements of this track combine perfectly to create an ominously emotive piece of music.

The old school jungle sounds seem to be cropping up a lot over the last few years with more and more jungle nights and releases. You mentioned the early 90’s as the golden era for you; do you think we could be on the verge of a new golden era of jungle? Is this something you’re alluding to, or perhaps encouraging, with the album title?

The Album title explains my journey and the fact that this project is me going back to the sound that first inspired me. I personally don’t feel that we are about to go into a cycle and Jungle (or whatever we call this sound) is going to be in fashion. I think a lot of it is just timing and the fact that the 90s sound has always held a special place in the hearts of many producers who may have carved their sound in that environment. There are not so many rules and formulas involved and creatively there is more space, so maybe its like a sanctuary to come back to and just be yourself.

Speaking of the golden era of jungle, music is made in such a different way now with software very much favoured over the analogue equipment that was used back then. Do you still use any hardware to make your music?

Yes I still love a lot of the old equipment, especially the sythns. I tend to experiment with old synths and then record them in to my sequencer and layer them and process them separately. I have purposely tried not to over produce the album and wanted it to have an organic sound.

‘Meridian’ provides us with a sumptuous taste of that organic analogue sound through its deep sub bass and rugged weighty drum break, while the electronic keys inject a dash of modern sound into the mix to create that perfect balance.

The raw old school elements that lay the foundations of this music we love are expertly emphasised through the running amen break and heavy grooving bass line of ‘Red Moon’. The calming aquatic keys in the background perfectly juxtapose the aggression of the drums to create a false sense of calm before the all out second drop, which seems purpose built to tear up the dance!

Another thing I read in one of your previous interviews was that your spell away from music was down to a mix of contract issues and needing to spend more time with the family. Is music something you’re able to focus on full time now?

Yes I signed a nightmare publishing contract with a huge US company in 2012 who stopped me releasing for 4 years and cost a fortune in legal bills to get out of. This was the catalyst to take a break from the scene for sure but was probably a blessing in disguise, as it gave me time to get out of the hamsters wheel and take a look at the musical journey I was sometimes blindly going forward with.

On the topic of your musical journey, I know you’re someone who is a fan of the whole spectrum of drum & bass, and I’m sure lots of other music. Are you very much on a jungle wave with your production at the moment, or is your musical creativity more of a constantly changing thing?

When I made this album I also made about 20 other tracks, a lot of which were drum and bass. When I say dnb I mean tempo wise around 174, as to me its all dnb anyway. When I came to compile the tracks I wanted continuity and the record to feel like it encapsulated an era. I wanted the album to feel organic and even though I normally love making more vocal tracks and different styles I decided to keep the album more instrumental and wanted it to be a journey to everyone who listened to it.

The instrumental journey that James describes is perhaps best encapsulated by the title track ‘Full Circle’. The pristine drum pattern and looped keys guide us from the off, through the tracks peaks and troughs, while the elongate morphing tones enter and depart at will, depriving the listener of any sense of control and allowing them to be carried to wherever this journey may lead.

‘Escape from Lando’, which features the albums only collaborator DJ Sense, induces another emotional journey, but this time the destination seems less clear. The eerie keys combined with a jittering drum break and hollowed out bass line creates an almost dystopian vibe, laced with a looming sense of panic, which is perhaps most aptly described by the titular word “Escape”!

If I’m not mistaken you were only 14 when you released your first track on Lemon D’s Planet Earth Records. How were you first introduced to rave music? Do you remember a particular track or artist that got you hooked?

I did release my 1st Ep on Planet Earth Records, which was owned by my good friend Lemon D, under the name Dexxtrous. I first met Kevin at the age of 13 when I used to go vinyl hunting at the shops in London. He was from Harrow and I was from Northwood, so he was just down the road. He introduced me to Dillinja and we learnt a lot about early production together. We listened to a lot of the early Detroit techno and Chicago house names like Mad Mike, Kevin Sanderson and Chez Damier from the garage scene; they were our heroes.

I actually grew up in Harrow as well! Was there much of a scene in that area when you were growing up? Did you ever manage to get to any clubs or events when you were starting out considering it was at such a young age?

Growing up in the suburbs, there was definitely a movement in terms of the early scene. The first rave I remember going to was called Bliss, which was an under 18 rave in Bushey in around ’91. They had a strobe light and a smoke machine, which was enough at the time to feel like you were at the real thing! Early prodigy tunes like ‘Charly Says’ with the sample of that cat from the children’s programme was the kind of stuff they were playing.

Not bad for an under 18 rave! As you mentioned earlier, you’re also involved with the relaunch of Deep Jungle, which provided plenty of excitement here at In-Reach. Will we be seeing any more unreleased J Majik popping up on there in the near future?

We have some really exciting artists coming on Deep Jungle and are currently on DAT 015. We already have the next 15 or so releases ready to go and are honoured to have the best names in the scene on the label. The response has been overwhelming and the label continues to gather momentum. We will for sure be releasing some more of my music on the label over the next 12 months or so.

That’s definitely exciting news! I’m sure that’ll give the heads out there plenty to look forward to. On that note, we’ll say goodbye and thanks for taking the time out to chat with us!

Head over to the Infrared Records bandcamp to grab your copy of ‘Full Circle’, which is sure to be a big contender for album of the year. Also, don’t forget to keep up with the constant fire being released over at Deep Jungle!

#Back Of The Stack 33 – Horrific James