Admittedly I’m a little late to the ‘cold sag’ party, before ‘Butter Fly’ landed in my inbox, I wasn’t familiar with the work of Lee Scott and I reckon I’m the definition of somebody that should find his latest album slightly too abstract. True to this statement, on first listen my ears just weren’t ready for it… The album operates in a dimension far from the hip-hop blueprint; Lee Scott is a kingpin in peculiar but astute lyricism, and whilst Dike’s soundscapes are of pristine quality with layers of jazz heavy melody, obscure details make you feel as though you’re listening from a weird bubble in the future. If like me you’re a relatively unseasoned hip-hop listener, sure, you may be confused by this initially but let me stress the importance of being persistent, a few listens down the line and you’ll be hooked, obsessing hard over Lee Scott’s discography and ambushing everybody on social media with the videos! This is the best kind of album to write a feature on, not only has it blown me away totally, it has enabled me to delve into a side of hip-hop I hadn’t even realised existed.

[dropcap]H[/dropcap]aving dropped on High Focus Records (27th April 2015), ‘Butter Fly’ is a testimony to the fact the label is a platform for first-rate UKHH from the full breadth of the genre. Lee Scott is an addictively curious artist and a pioneer in a division of the scene far from conventional. Emerging to prominence in 2003, he has put out over 20 releases all of underground acclaim. But not only does he influence through his music, familiar with Blah Records? Blah is a strange label that for good reason has cult like status, trust, once you start looking into it, there will come a point and whilst you may not realise this immediately, you will have succumb, succumb to the slang, slogans and indefinable ritual! Anyway, through his label Blah Records as a hub, Lee Scott has been integral to the construction of a culture within a scene.

‘Butter Fly’ is a Dirty Dike production; the album is in a one rapper one producer formula, a format perfectly suited to these two artists as in their cohesion they’ve crafted a world you’ll very much want to be a part of. Now, whilst this isn’t the first time Dike’s flexed his production skills, I expect up until this point most heads still regarded him primarily as a UKHH wordsmith. I think in cases such as Dike’s, because he’s such an outspoken lyricist, it perhaps takes a little longer to assume in equal measure the identity of both rapper and producer. However, this is Dike’s first album in the role of sole producer and there’s no doubt about the fact his production skills should be regarded in evenly matched excellence to his skills as a wordsmith.

Lee Scott and Dirty Dike have achieved perfect musical equilibrium. There’s a type of rawness exclusive to Northern accents right? Lee Scott possesses a gritty, scouse voice that gets more appealing the further into his vivid detail your lead, on the flip side of this, Dike’s beats are ever smooth making for the perfect buttery juxtaposition. Opener ‘Butter Fly’ sets the mood, the vibe is comprised of the sort of smokey, jazz-glamour I’d associate with a 1920’s speakeasy – an ambience continued throughout. The album has subtle shifts in mood but consistent depth. Perhaps the most prominent switch-up in atmosphere comes through ‘Eight O’Clock in the Morning’, a tune in which pranged-out, edgy horns embody elements of a twisted, black-comedy sketch.

Lyrically, Lee Scott flits between eccentric story-telling, humorous observation and insightful social commentary. He’s effortlessly cool and the album is a master class in the art of not giving a single fuck. Even when he’s addressing societal faults, primarily in ‘Spaced’ and ‘Watch TV’,  stylistically he opts for satirical brilliance. Now, ‘Waking the Walk’ is a tune of Ellesse appreciation and ‘Sell Drugs’ a piece of music comprised of ample Blah slang, on the surface these tunes may seem thematically simplistic and whilst on first-time listening you may feel more engrossed in Lee Scott’s charmingly lad-like eloquence, the thing with Lee Scott is that he’s capable of more than one-liners and powerfully moving statements are often obscured! Lee Scott’s bars are at times complex, eccentric but always compelling. Here are a few bars of choice from the album that he has kindly dissected…

Eight O’Clock in the Morning

Then one day you’ll awake in the same place, no-one around, no trace of life that isn’t past tense to grace your sights and with the click of your fingers day is night.

“This is just me pondering death and some sort of after life based on a psychedelic trip and the feeling of being able to manipulate your surroundings. The lyric that follows on from this is ‘switch the full spectrum on and off as you please, no God’s to drop to your knees too’ the whole second verse is written from the perspective of like death/purgatory. Though you can pick out certain lyrics to stand alone it is one piece it all continues on. It’s a beautiful death as a friend of mine once said. Some of these ideas and themes are continued on the track ‘Spaced’.”

The only advice I’ve got is live and stay positive, but keep the receipts for any props you give until the witch hunts headin’ to where the corporate bosses live.

I mean, it pretty much speaks for it’s self, live your life try and stay positive and shit but also be careful of who you swear your alliegance too because until the corporations have fallen, they are essentially all the same. Obviously this is open for interperation as it can be applied to many different situations.

Like a clique of blind mice that wouldn’t notice if I told them and they lived and died twice.

“Well, this follows on from “the bizzies listen in and think we’re bickerin’ the kip of them though I’m sick of em… Like a clique of blind mice” and so on. I’m talking about the police, bizzies means police, just saying on that particular occasion they were being dumb and wouldn’t understand what we were talking about even if I explained it to them and they were awarded two lifetimes to think about it.”

I want a castle with guard dogs and a moat, and I choke with a poison dart frog in me throat, but there’s still hope.

“In a nutshell this line can be summed up with a popular phrase made even more popular by the great Danny Glover ‘I’m getting too old for this.’ Then the lyric that follows on from this is ‘but this is rap and it’s big biz’ so there’s still a chance! I’m just knocking myself down then picking myself back up like a self destructive motivational speaker.”

I’m starting a new religion based on a Buseyism, possibly the fly one it’s a good day to die on.

“Shouts to Lord Gary Busey, he has these things called Buseyisms, he defines words by breaking them down into acronyms, the ‘FLY’ one I refer to stands for First Love Yourself.”

I’m recording over the captain’s log, whilst these self important slobs imagine god and let the tail wag the dog.

“People generally need to do more than just sit about and let other people deal with shit, we all know it but we just let the cogs move as they do and moan about it, we generally don’t do shit because we are to absorbed in our own worlds and so on.” 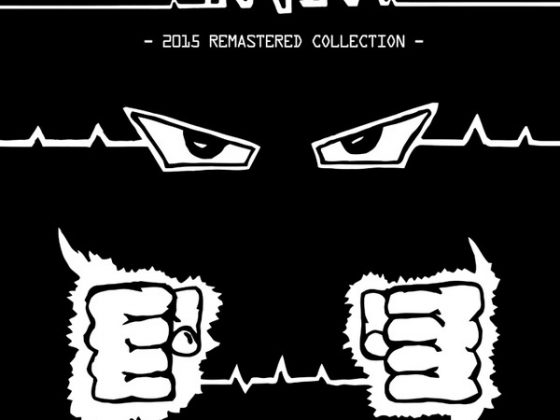