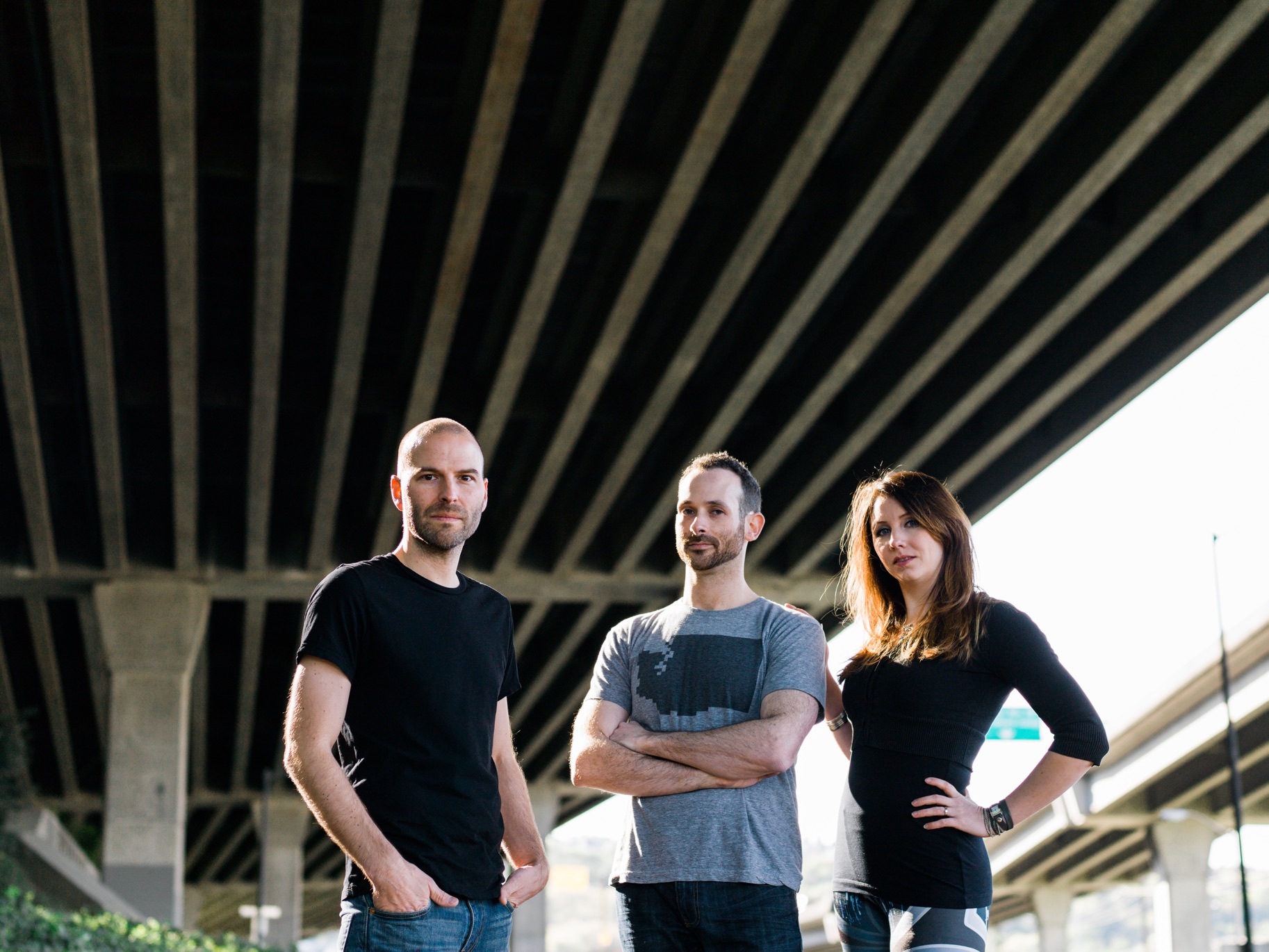 Quadrant and Iris rock up on the French power-house, Vandal, with the ‘Scattershot’ EP which bears voluptuous fruit in three guises; ‘Scattershot’ and ‘Benzene’ both give nice solid builds with great layers. The former is a more bouncy track and the latter more minimal and one thing is for sure – MC’s are going to love them! ‘Airbrake’ is a full on classic bass in your face, rumbling Jungle heavyweight! Really fine detail in the low end here. It’s a complete killer, which my neighbours are learning to appreciate!
In-Reach’s Lindsay caught up with the guys to get the low-down…

Hey guys, thank you for joining us on In-Reach today! Your latest release ‘Scattershot EP’ has just dropped on the mighty Vandal Records; this must be a pretty exciting time for you!?

Iris: Sure! We’re excited about every release we put out! This one seems to be getting a lot of good response as well, so that just makes us extra excited!

It’s fair to say that the last few years have been something of a whirlwind for you both with such an incredible amount of releases on just about every major label in the industry! Was world domination always your plan or something that happened purely by accident?

Iris: haha…I’m going to say it was purely by accident. Quadrant and I kicked things off by sending our first tune, “Anthropocene” to Goldie and by some miracle he loved it. Our releases since then have kind of been a product of making some pretty decent tunes and getting to know a lot of people also making and putting out the kind of DnB we love. Any label we’ve put music out on has been a label that we not only respect, but that we have a genuine love of the music that’s being released by that label. We’ve gotten to work with some really amazing and down to earth people and are super grateful to have been given that opportunity!

Quadrant: I guess some people set their sights on world domination but honestly that sounds exhausting. We just keep our heads down, try to do a lot of work we’re proud of in the studio, and as Karen said, we’ve been been unbelievably fortunate to have some people whose opinions and music we respect take an interest.

So let’s talk about your EP! One of the things I love about your music is that although you always bring new and interesting elements to every track you manage to tie it all together with a particular sound. Do you often have a theme in mind when putting tracks together for a release or do you let it come together organically?

Iris: Sometimes we have a theme in mind, like with the ‘206’ album and using sounds and experiences from Seattle, but in the case of the Scattershot EP, we sort of sat down and banged out a few tunes! Airbrake with Method One was a tune we’d actually started awhile ago, but this gave us an opportunity to finish it up, for Benzene we were going for a vibe kind of like “The Only Way Out is Through” but a little tougher and darker. Scattershot started out as a minimal stepper before it completely went off the rails into the final version we’ve released.

I think my personal favorite track has to be Scattershot, do you guys have a favorite? Which track had you vibing out in the studio the most?

Quadrant: I suppose different times call for different tunes, so it can change by the day. When I’m playing on a great system, Airbrake is my favorite because there’s such a range to the bass. I think Scattershot wins for groove though.

Iris: I think for me it was Benzene, I’m kind of a sucker for the driving bassline and drums. That being said it’s hard to pick a favorite, they all have some great elements going on in them.

As a production duo you’ve become renowned for your successful collaborations, most recently so with Kid Hops on your album ‘206’ on Commercial Suicide. I notice on your most recent release that you’ve also worked on a track with drum and bass veteran Method One, can you tell us how this collaboration came to be?

Iris: We met Jason (Method One) while playing a gig in San Francisco several years ago. We’ve been friends ever since! Airbrake came about when Jason came up to Seattle for the weekend to do a little snowboarding with us, there was obviously music making involved as well.

Quadrant: Yeah the better question is “how have we not made way more tunes with him?” And the answer is, “we have, and we’ll definitely make more”

Speaking of drum and bass veterans you must be coming up to your 10 year anniversary, Quadrant! Big ups! After working with so many incredible artists on some of the most influential labels our scene has to offer I have to ask you what it is about drum and bass that’s kept your focus all these years?

Quadrant: Oh wow yeah, I hadn’t thought much about it but 2015 was the 10 year anniversary of the first Quadrant release on Renegade Hardware. I guess it just doesn’t seem like it’s been that long which means the music still holds my interest and speaks to me on some level… maybe one day I’ll wake up and think “this music isn’t doing it for me, I’d rather be doing something else” but that day definitely hasn’t arrived yet.

So, let’s geek out for a moment and talk studio, what’s your DAW of choice and which plug ins do you most enjoy using?

Iris: We’ve been primarily using Ableton since Leigh and I started working together. Leigh’s played around with a few other DAWs, but so far Ableton has been the one we’ve stuck with. I’m entirely sure I’ve mentioned this before, but The Valhalla Sound plugins are some of the best we’ve used when it comes to adding reverb to our tunes. Also U-He can never do any wrong with their plug ins, they really tend to be our go-tos pretty consistently. To take it one step further I’m a big big fan of the Joey Beltram hoover preset on Diva.

Quadrant: Yeah, Valhalla and U-he are definitely mainstays– the FabFilter and Slate stuff has also been making it into a lot more of our productions as of late. We also have NI Komplete 10 which includes like a million plugins and libraries, 80% of which I forget to use, but then discover again 6 months later, which is like finding $5 in your pocket.

A few of the basslines on the album were done on Xfer Serum, stuff from Kush Audio and Sly-FI has been on various drum busses lately… man, we have a serious plug-in problem. This could be like a whole interview in and of itself!

Speaking of the studio, do you have any more releases lined up or is it back to the studio for you now?

Iris: We have a tune coming on Hospital March 4th! Its one we did with Kid Hops and a local vocalist, Shaprece called ‘Get it Back’. This will be part of Hospital Records Future Sound of America EP, featuring US artists, Ownglow, Jamal, Gridlok, Submorphics, Sinistarr, and Greazus. After that we’re in for some serious studio time, we’ve promised a few projects to people and have a few tunes that need some finishing touches!

Quadrant: After the Hospital release, I’ve got 2 tracks on a collab single with NC-17 coming out on Dispatch LTD. I’ve also finished up a remix for a Bachelors of Science track off their last album, so that’ll be forthcoming in not *too* long. After that, we’ll just have to see what makes it into the pipeline first…

And lastly before we go, who’s smashing it for you at the moment? Who should we be watching out for?

Iris: Oh man, lots of great newer talent out there right now! Survey, Chorux, Monty, Sixfour (another Seattle local, keep an eye out for him!), Definate, Bone, I’m sure I’m forgetting some people as well!

Quadrant: I always say Homemade Weapons but seriously he just keeps getting better and better– now he’s got his own label, Weaponry, and we’re both stoked to see where he takes it. I’ve heard some new stuff from HLZ recently that blew me away. Philth is another one who’s doing amazing work… I also like pretty much everything I hear from Ed:it. Too damn much good music, we’re forgetting loads.

Thank you for joining us! Any shoutouts?

Quadrant: Thanks for having us! Huge shouts to Julien and Julien at Vandal, and to all our friends the world over who support and inspire us on a daily basis.

Iris: Also big big thanks to anyone who’s supported the Scattershot EP so far! Its much appreciated!

The Discogs App is finally here…