With snow festivals cropping up around various corners of Europe, festival season, once largely considered exclusive to the summer months, is now very much an all year round affair! I have to say; in previous years the snow festivals available haven’t entirely ticked my boxes musically. I’d also like to highlight I can’t ski – and rarely walk with acceptable decorum, so the possibility of seriously injuring myself down to an inability to balance meant the winter sports couldn’t lure me out either.

This all changed however when last year Horizon Festival debuted on the winter festival calendar! I should probably emphasise that I have an over-developed obsession with drum and bass, so a principle enticement of this festival is that as opposed to representing the genre more on the Rudimental side of things (like a number of other snow festivals), it delves that little bit deeper into underground culture.

The Horizon Festival line-up is an eclectic mix of music from all areas of the underground electronic music spectrum. Whilst Exit Records and Critical Music were representing drum and bass on the line-up, the widely respected and influential nature of these labels, is a reflection of the musical ethos of the entire festival. 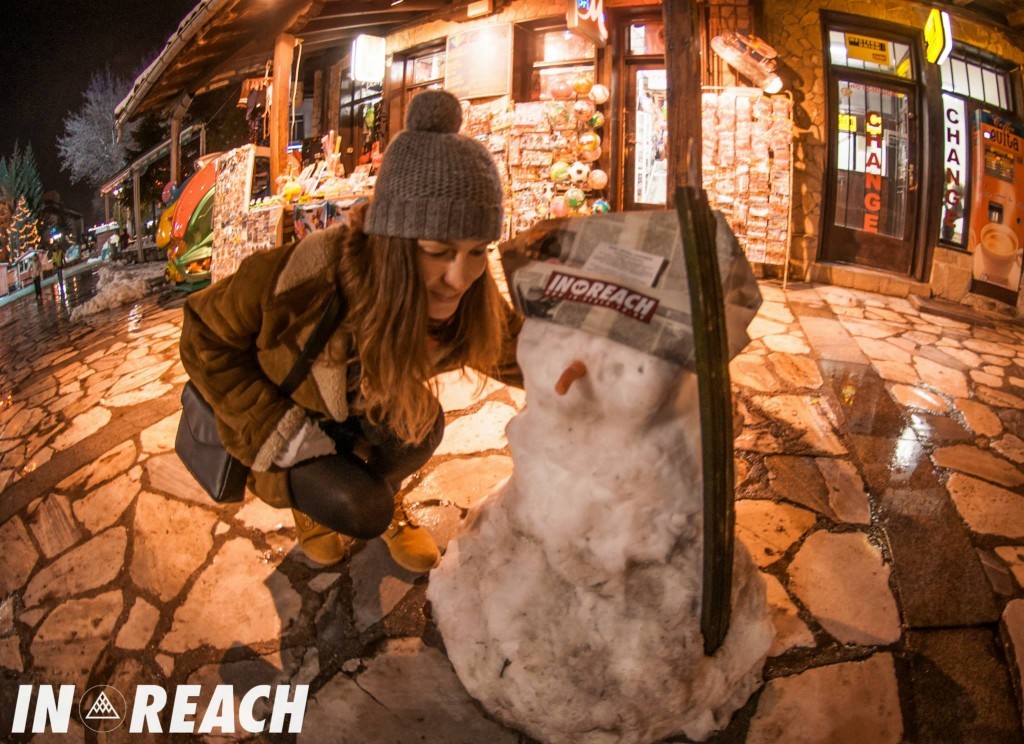 And so it begins…

Saturday 8th March, arriving at the airport I was met by Dan & Nick whom after a long evening at Fabric (6 hours of Calibre, who can blame them?) were pretty much looking how I would be feeling every morning for the rest of the week. The satisfaction of people watching is definitely heightened in an airport context; the added dimension of who will be heading to the same location really takes things to the next level. Horizon Festival people watching was in no way a challenge, mostly student, mostly men, and although club culture may not have a subcultural uniform as obvious as punk, there was a distinct turnout of Beyond Retro regulars, a proportionate array of street-wear brands, and a considerable representation of Air Max’s.

Now, there is one group that I feel deserve a special mention… I’ve been to a number of European festivals so am not unfamiliar with the concept of fully embracing the festival spirit on the flight there. However, I do feel that drinking so much you pass out and head butt a trolley, roly polying down the aisle on landing, then on arrival being escorted off the aircraft by the police, could potentially be taking things a bit far!

(Just on a side note, does anybody else find it difficult walking through security without the feeling that somehow you are in possession of class A’s?) 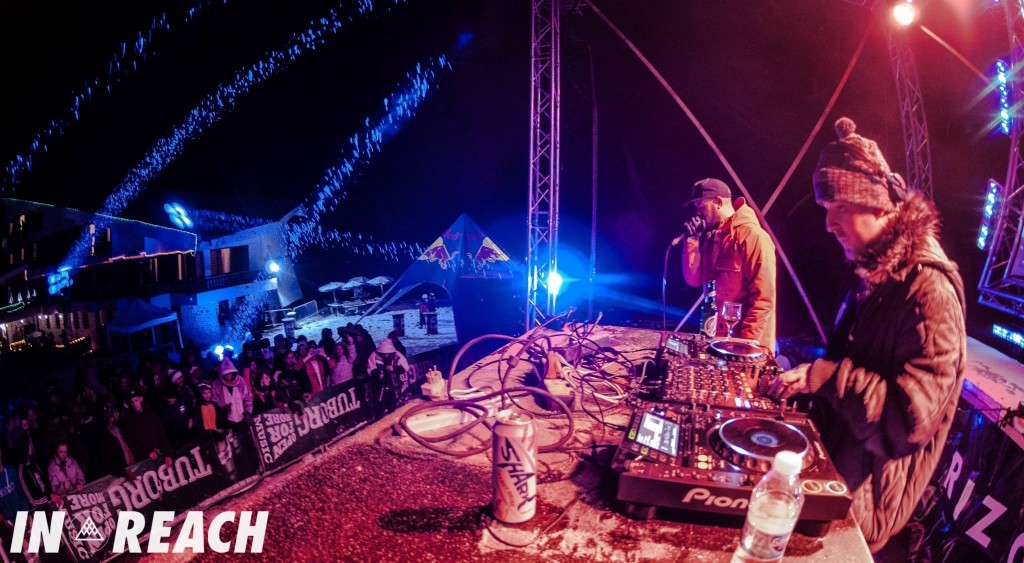 Arrival at our destination, Bansko ski resort – Bulgaria, and first impressions of our accommodation, Hotel Tofana, were satisfactory. Not bad considering it’s at the cheaper end of the market, it’s also a far cry from the humble tent, but you very much get what you pay for.  Bansko offers a range of upmarket hotels; one of the advantages of this kind of festival is that as opposed to wallowing in a tent, when fragile, you can make use of the brilliant facilities available in the accommodation – principally the spas, but also the hotel restaurants. Tofana’s menu, consisting of a substance called Kebabche – described by a victim as “the product of a baboon’s anus” – was terrible. The spa had about as much going for it as the Kebabche… when it comes to accommodation I’d highly recommend paying more, the lesson has been learnt.

Horizon’s set-up is venues in various parts of the town, the centre point of which is hotel Gardenia. With a 24-hour bar, home to one of the festivals clubs, and some pretty special couches (due to a tip-off we even found a ‘surprise’ at the back of one of these), Gardenia is the place to be before and after the evening activities.

Bansko is a town both charismatic and unique. Despite the substantial number of sex shops and strip clubs (questionable when considering the population of around 9000), there’s a charm to be found in a town that in early-March is still flying the flag for what appears to be Christmas decorations. In consumerist terms, shopping outlets include atypical European leather shops (what is the obsession with these?), ski hire stores and by far most captivating, the Bulgarian antique shops. These antique shops far surpass the individuality of the contents of a stall on Portobello Market – items for sale including timeworn Eastern-bloc military memorabilia, and what appears to be prehistoric ski gear. The architecture of the town is traditional, it is a location fundamentally beautiful and it is a place largely unspoilt by the mundane repetition of Western corporations. 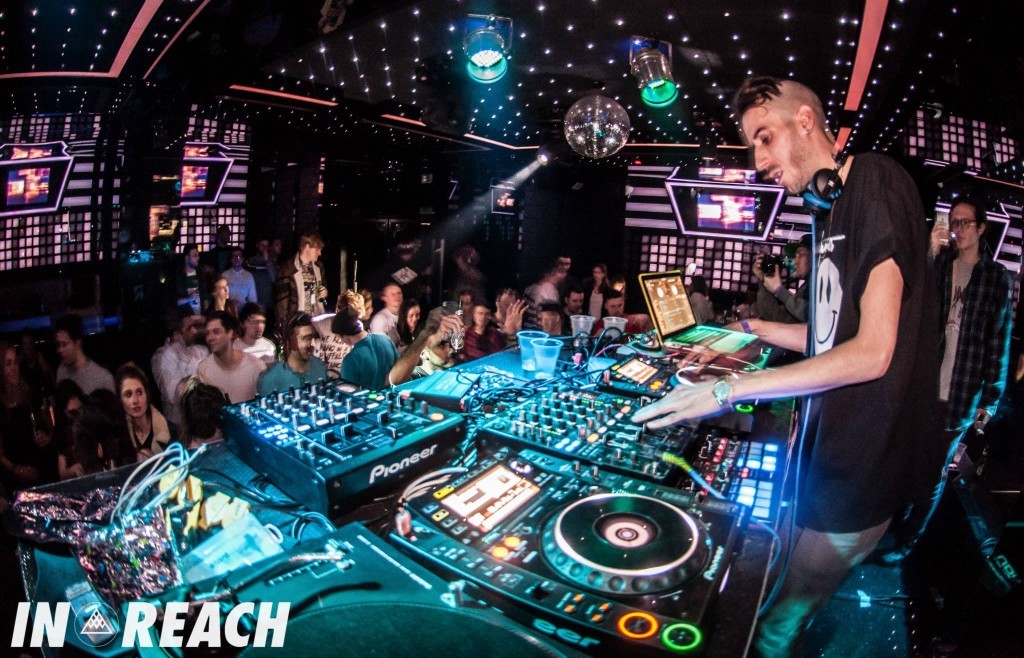 As a music journalist, I have an ashamedly unvaried approach to clubbing. It is a likelihood that most weekends I will be found at either Fabric or Plan B, it is a certainty that regardless of location I will be two-stepping to drum and bass.

An area that differentiates Horizon Festival, particularly when looking at the kind of artists it’s booking, is the size of the line-up. As opposed to a festival say, like Outlook, where there is such a large amount of outstanding music, for me personally it’s difficult finding the time to move outside drum and bass and explore other genres. Horizon Festival, with around 3 or 4 stages/clubs in action per night, and a smaller-scale, pinpointed niche of the finest artists from numerous electronic genres, enables heads to check out music perhaps outside the peripherals of their usual choices.

Horizon manages this so well because the crossover appeal and the quality of the line-up is spot on! Everything I saw, minus Kerri Chandler (this may shock you, but he just doesn’t do it for me), was something of a revelation, if not an education. Catz’ N Dogz blew me away, their selection injecting Jack’s House – a club in which the bar staff were literally playing with fire – with a vibrancy so hypnotic, stimulants were needed to cut shapes until the early hours.

TURF’s night was a personal favourite, having caught the sets of Applebottom, Eliphino and Cropper, not to mention Hypeman Sage on mic duties, it was an evening of non-stop vibes! The Club (yes, a club called ‘The Club’ does exist) is a venue in which the lighting gives a definite nod to 70’s disco. There was no need to pull out ‘The Hustle’ though; the beats were a flawless journey through the rhythms of house, garage and hip-hop. 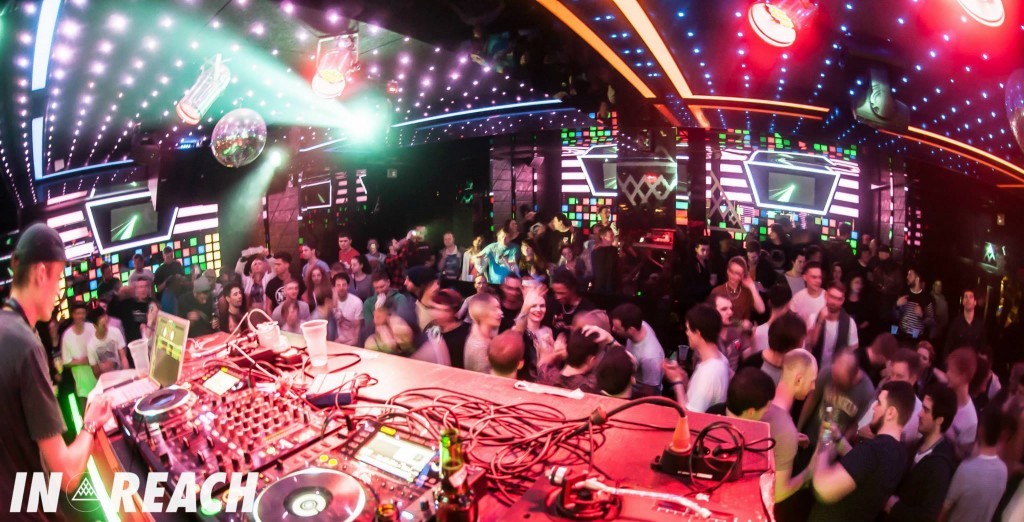 Another area that characterises Horizon is the intimacy of the clubs and stages. Take for example Oxygen nightclub, Channel One, a roots reggae sound system whose selection of rich bass is perhaps at ends with a snow flurried ski town, beckoned a charm in this smokey, small-scale venue, that was quite unique. Even the outdoor stages had a distinctively personal quality. It’s quite an experience witnessing the likes of Bondax playing at the top of a mountain, whilst snow falls, and there’s an intimately sized, fully immersed crowd going for it in ski gear.

Drum and bass in a strip club, need I say more? 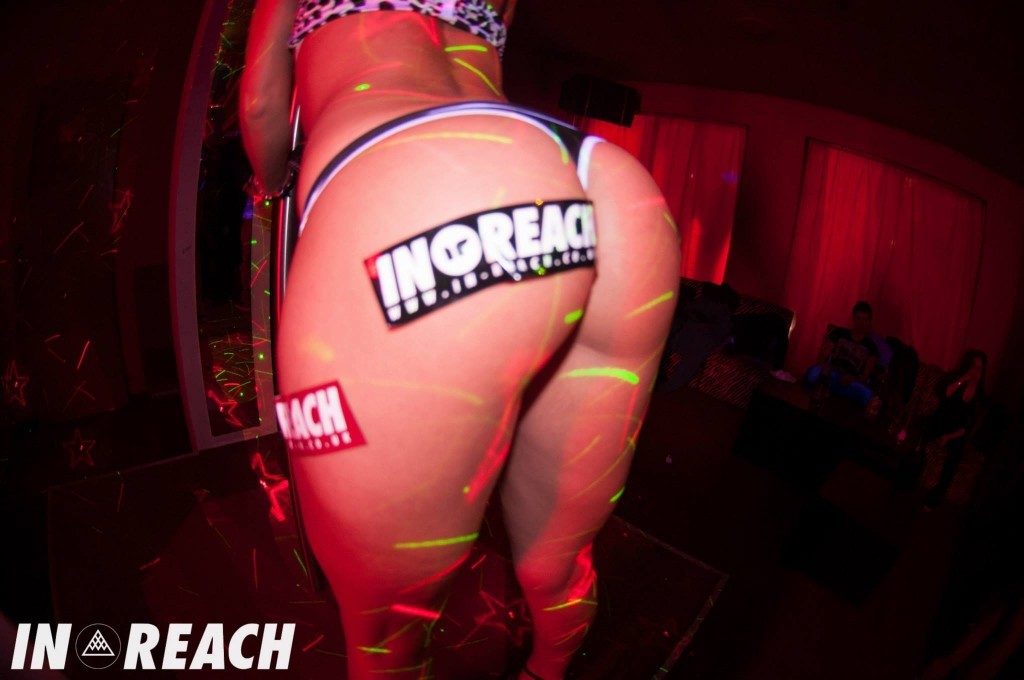 Anything in a Bulgarian gentleman’s club on paper likely sounds sleazy… I can confirm however, after an evening at Go Go Girls, that the combination of Exit Records, and naked, pirouetting ladies is the best kind of eccentricity. The venue saw dBridge, Skeptical and Dub Phizix take to the decks, followed by an Exit family btbtb. It goes without saying that the quality of the music was exceptional. Strategy’s bars had everybody giggling and undoubtedly contributed to the incredible vibes of the night. Mostly steered towards the strippers, lap-dances and getting the Exit DJ’s on the pole, in a cruel twist of fate, it was Strategy who shirtless on the pole was looking anxious about the situation for his trousers – he had a lucky escape!

DBridge’s Exit Records can make you feel like a part of something truly remarkable in any setting. It would seem the focus of an evening such as this one would be the slinking, female silhouettes. Whilst this certainly contributed to the transcendent positivity (particularly if you had a lap-dance), this night was made truly special by the family atmosphere Exit Records bring to everything, a feeling increased tenfold by the intimacy of a 100 capacity venue – a phenomenal night. 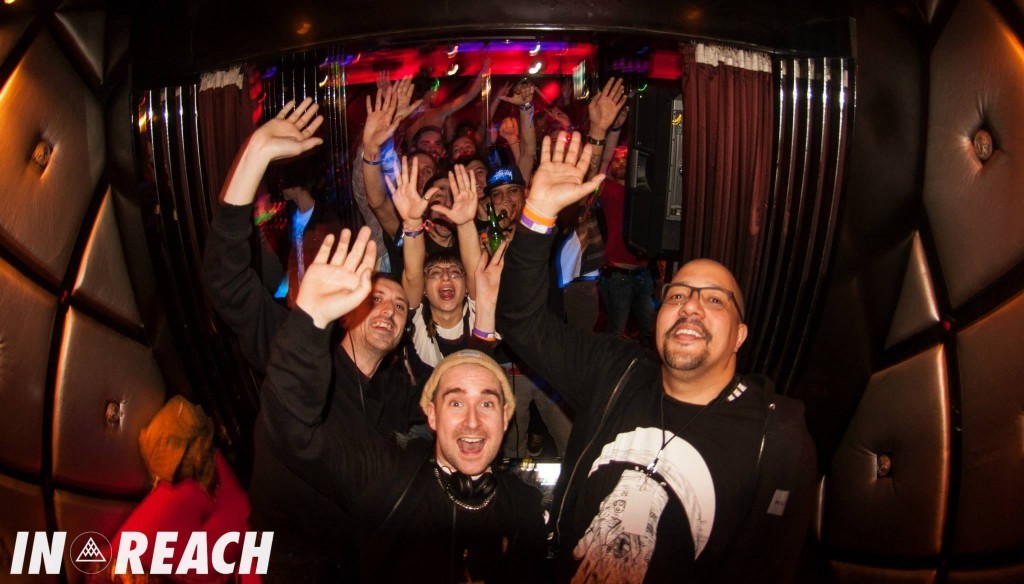 Firstly, hats off to the impressive number that managed – everyday – to party until late then head up the slopes first thing!

Before reaching this festival I was wrongly intimidated by the ski/snowboarding skills of fellow festivalgoers, I felt the traumatic experience of descending into snow whilst everybody cruised past laughing would be too much to take –it’s worth pointing out however that Horizon seems very much a festival for winter sports beginners.

I should probably emphasise the In-Reach crew (plus Skeptical and Chris) didn’t make it onto ski’s/ snowboards… Whilst ski and snowboard facilities are excellent and everything is relatively cheap (so it is the perfect opportunity to get started), we instead opted for sledging. Maybe an odd choice, but this was an absolutely brilliant experience.

I’m not entirely sure of the rules regarding sledgers, skiers, and snowboarders going for it on the same slope. I’m also not sure if there are commonplace regulations when it comes to the use of sledges on sharp slopes. What I will say though, is that my brakes didn’t work, slight bumps rendered me mid-air, and down to the speed my sledge generated, I stacked it continuously – on one occasion even loosing my sledge then proceeding to chase it down the slope… This really didn’t matter though; I felt I was in the sledging equivalent of SSX snowboarding!

To sum things up, Horizon Festival is an exceptional event. Whether you’re into skiing, snowboarding, whether you would like to take things to the next level and try sledging, or whether you’re simply there for the music, Horizon is an event that I would highly recommend. We had an amazing time and met some lovely people. Huge thanks to the Horizon crew; we’re looking forward to next year 🙂 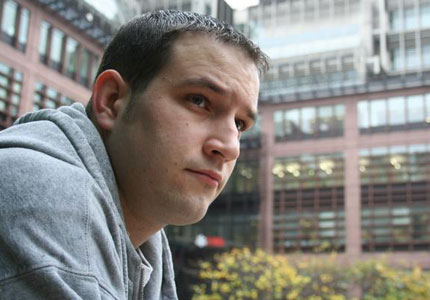