The Below is taken straight from Dub Phizix’s site.. Just Passing on the heart felt message. If you have ever lost a close one, then you know how it feels. Our respects going out to Johns family and friends:

“Dub Phizix”
As some of you may know, my good friend John Millet, other wise known as Salford John was attacked in Manchester in the early hours of the 24th of January, putting him into a coma. His injuries were too severe for his body to survive and he passed away a week later with his family by his bedside in Salford Royal hospital. It meant I’d lost one of the best mates I’ve ever had, Manchester lost a hero and worst of all 2 little girls lost their dad. I don’t think we’ll ever stop missing him.

John was like a brother to me and every single one of his other friends. He was always there when I needed him and he never let me down. Aside from being one of the warmest people I’ve known he was also one of the funniest.
He had a way of making people see the light side of anything and he would never argue, whether he agreed with you or not. It just wasn’t in his nature. Instead he’d just find a way to take the piss out of you for it and turn it into a joke. His ability to make people feel welcome was one of the reasons he was so popular and he never left anyone out. If he thought someone was the underdog or wasn’t feeling comfortable he’d take them under his wing and stick with them. He also did that if he thought you didn’t like him. He’d talk to you even more.

If you needed to get a job done he would do anything he could to help you. After working in all kinds of different jobs all his life he knew somebody in every occupation you could think of and he knew a little bit about everything.
That was also due to the fact that he was so inquisitive. He always wanted to know about you and what you had done that day. Every conversation would start with a massive list of questions and he would remember the answer to every question in every conversation for every person he spoke to. He was sharp like that.
The week he was in hospital and people came to see him, we all realised how everyone had their own special relationship with him and how every one of us felt just as close to him. There was probably 100 different people went to see him that week. Nearly every one of them said: “He used to ring me every day” , we realised he must have just sat in his jewellery shop, going through his phone, calling people all day long to hear their latest news.
He ended up being a point of contact for all of our mates. If you hadn’t spoken to someone for a bit you still knew what they were up to because John had told you.

But despite having all that time for his mates, nobody came before his kids. He was so proud of them and they were everything to him. His eldest girl Allahnnah was a credit to him in the days he was in hospital. She walked all of his mates in and out of the intensive care unit to see him, made sure everybody knew what was going on and told them what the doctors had said. The whole time still managing to keep everybody’s spirits up. She’s only 9 but she’s just like her dad already.

For me personally, I found John easier to talk to than anyone else I know. I could sit and chat to him for hours about absolutely nothing and never felt a way. I always felt comfortable in his company and loved listening to his mad opinions on things or his nicknames for stuff which had no relation to the original. [for instance a bottle of courvoisier was called “kwokers”, tinnitus was called “the titty shitties” ] Somebody asked me recently how we became friends and I wasn’t really sure how and when we met. One of the earliest memories I have of him though, was when I would play at ‘Hit and Run’ at Area 51 in Manchester. John would always be in the same corner, on his own, doing this kind of boxing dance that only he could do properly. The booth there was a few feet up from the dance floor and from the decks you couldn’t see the people around it but every now and then the middle finger of a massive gold clad hand would pop up over the top and that meant John liked the tune.

After a few years of being mates we ended up having loads of our own tunes we would sing about John but my favourite was our version of Bill Withers – Lean on me, this one was my favourite because the words are so true… 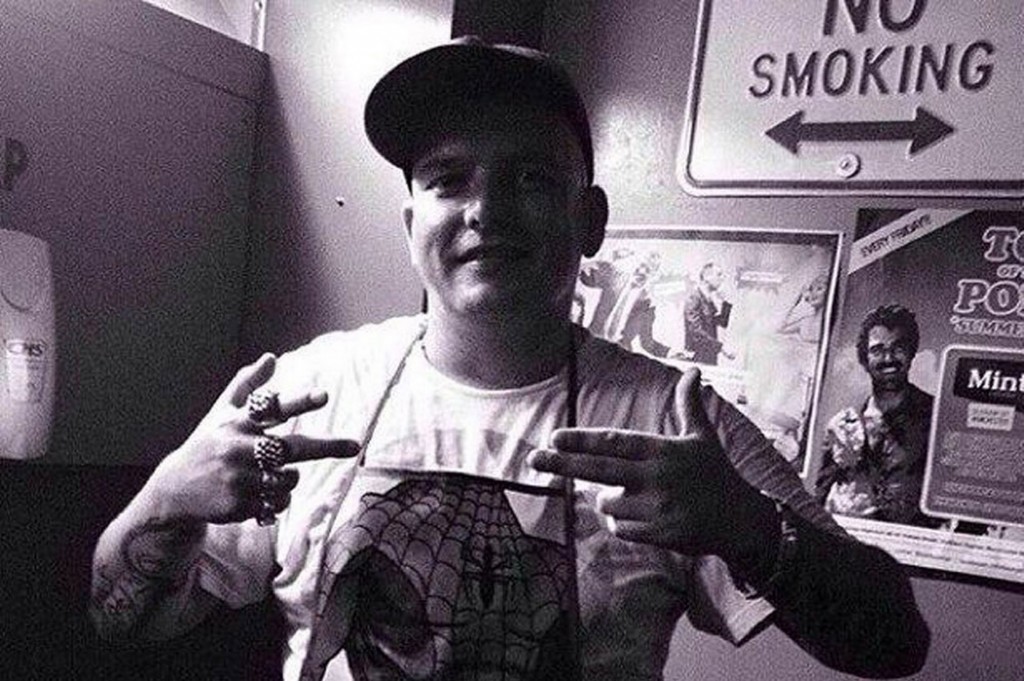 I sung that to him on stage in front of about 4000 people at Boomtown festival a few years back. He hated it.

The other tune people are probably more familiar with is ‘8 Gold Rings’ It’s originally an A$ap Ferg tune about Shabba Ranks that Strategy would sing about John and our friend Bricktop made it into a tune. I later did a remix following a conversation with John in the pub one day which went some thing like:

I necked my pint and got him to the studio as fast as I could before he changed his mind.

I know only the good things get mentioned about people after they die and it can be hard to gauge what a person was really like but every compliment I paid John here is true and I’m glad I said it all to him while he was alive. We had enough nights, shedded to have the chance to do that and I’m lucky that I have so many good memories of him. He really was one in a million and he won’t ever be replaced.
John will be a legend for years to come in this city. He’d got to that status before he died and myself and the rest of his mates will make sure that doesn’t change. Recently somebody said it’s a shame that the tunes will now become tributes to him but they were tributes anyway. He was, and still is a hero.

With that in mind, I’ve decided to give my ‘8 gold rings’ mix away here. You can download it below but there’s something I want to ask in return. If you download the tune, can you also please make a donation to go into a fund for his daughters. Allahnnah who is 9 and Elissia who is 3.

John was always there to help his mates, but what hurt the most was seeing him in that bed with all the tubes plugged into him, knowing he needed us and we couldn’t help him. That broke my heart. All that was left was to promise him I’d do what I could to see that his daughters were OK. Hopefully you can help me keep that promise

DOWNLOAD ’8GOLD RINGS’
[If you want to share the tune, please either send people to this page or share the donation button with it. You can get the code for the button here]