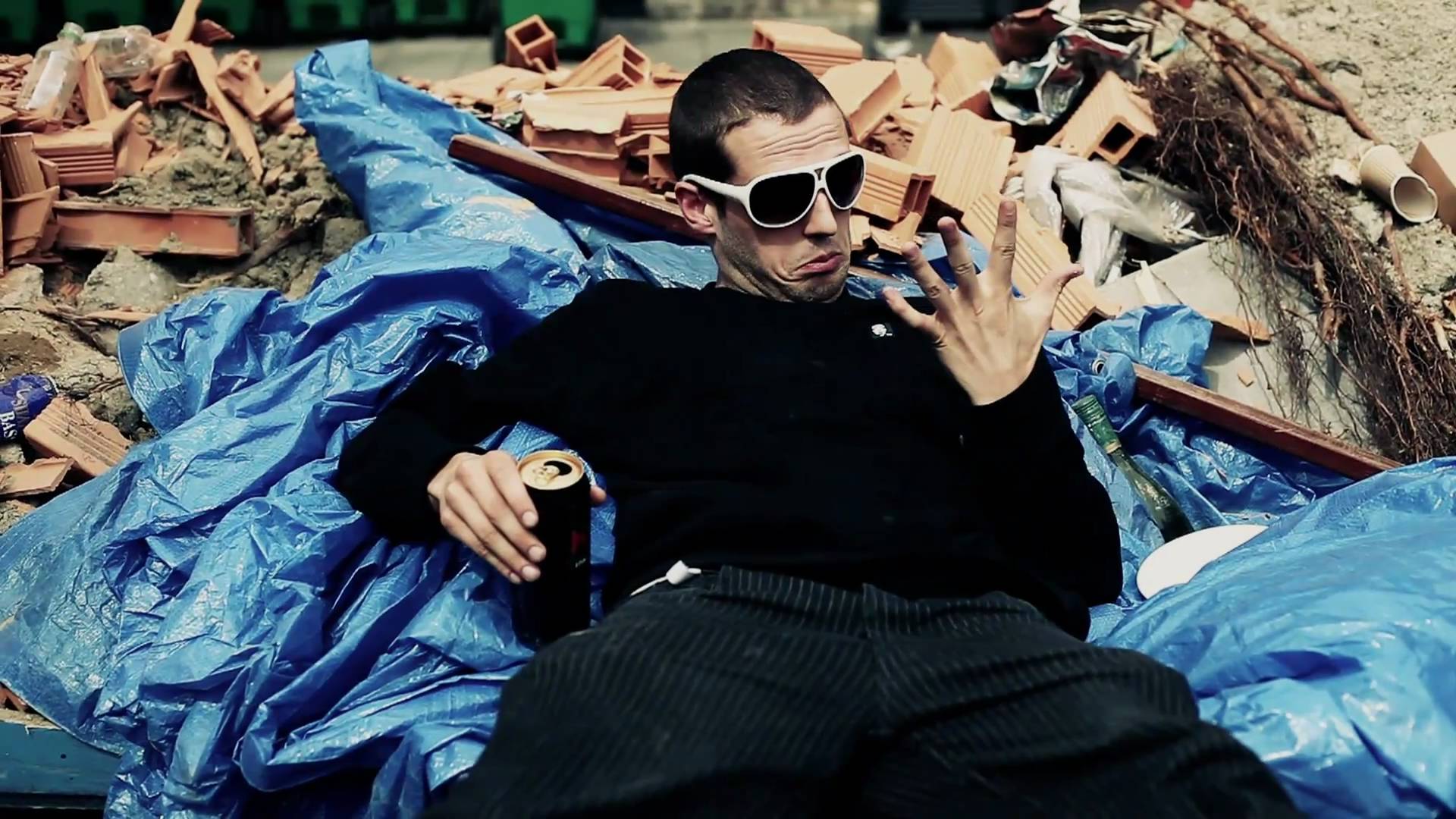 Dark Imagery and the Absurdity of Life: In Conversation with Jam Baxter

High Focus Records has become a UK hip-hop powerhouse. As somebody that was brought up on a heavy diet of drum & bass, the likes of Task Force, London Posse and Phi Life Cypher were never really on my radar growing up. Whilst I’d partially put that down to tunnel vision, I do feel in the past UK Hip-Hop has in some ways been unfairly marginalised. However, for those of us that didn’t catch on to the first wave of UK Hip-Hop, I’d wager a high percentage have been introduced to the genre through the rise of High Focus, a label that undoubtedly has been bringing in a new generation of hip-hop enthusiasts.

Jam Baxter, a long-standing member of the High Focus crew, is an artist that has established himself as one of the UKs most accomplished hip-hop lyricists. As a collaborative artist he is a founding member of both the Contact Play and Dead Players collectives, as a solo artist he has put out a number of critically acclaimed singles and EPs. Baxter’s style is poetic, his bars are made up of eloquent yet cryptic imagery and there’s a unique charm in this; the complexities of Baxter’s metaphors ensure each time played the listener picks up on different details of his vivid narrative – as opposed to being handed everything immediately.

Baxter’s most recent release, ‘So We Ate Them Whole…’ a solo LP that dropped on High Focus (01.12.14) is a testimony to his talents. The album sees Baxter explore personal and societal themes in the context of an experimental hip-hop framework – courtesy of Chemo (Telemachus), the man behind the entirety of the albums production. In light of the release and ahead of the album launch party at Brixton Jamm this Friday (19.12.14), we were keen to have a chat with Jam Baxter himself, here’s how things went down…

Hi Jam, hope you’re good! Your album ‘…So We Ate Them Whole’ dropped a few weeks back on High Focus, could you tell us a bit about the album, and how you’re feeling now it’s out there?

“It’s kind of my third solo album, but really it’s my second. There’s a hench fly on the front. Chemo produced it. I think it’s the best music I’ve ever made, but every artist says that when they drop something. The difference is when I say it it’s true. I feel much the same now as I did before but I get more nice messages on twitter these days, which provides a slight lift in the afternoons.”

I bet! Has the album panned out in the way you imagined back in its initial stages?

“Pretty much. I had a vision for it but it wasn’t particularly defined, I knew Chemo’s style of production perfectly fit what I wanted to do so I just kept writing and roughly a year later it was done. I didn’t start looking at it as a whole singular entity until the final stages, I just took it song by song so I didn’t really imagine it in any complete finished form until it was in its complete finished form.”

The album sees Chemo entirely behind production, how have you found working with one producer throughout as opposed to working with multiple producers? And how did the pairing of yourself and Chemo originally come about?

“Working with one producer is great. Especially when they’re recording, mixing and mastering it too, and especially when the producer is kind of guy that worships a pheasant and won’t stop calling you Donald. I started recording at Chemo’s because Fliptrix did too and he ended up recording and mastering a lot of my work. I always loved his production and found the atmosphere he creates in his music really inspiring. I was always too prang to ask him for beats but then I was like ‘Can you produce me a whole album?’ and he was like ‘Yes’, which was the correct answer.”

In terms of the dynamic between yourself and Chemo have you found any particular elements of Chemo’s production style have enabled you to explore avenues you maybe wouldn’t have done previously?

“Perhaps. His production is so well suited to my style and subject matter that I felt entirely free to let loose and just write. I think when your only concern is writing the best shit you can to a beat that suits you perfectly and there are no other influencing factors you get to explore whatever you want. His beats just gave me that freedom. He is basically an absolute g.”

I’ve read a number of reviews that have suggested in this album your sound and style have in some ways matured, how do you feel this album differentiates and builds on your previous work? And in terms of concept, what were you trying to bring across?

“This album is definitely far more stylistically refined than anything I’ve done before. I think I’m better equipped to build on the themes of my previous albums now. It’s all heavily autobiographical so it makes sense that the music matures as I get older. There is still some of that reckless immaturity and hedonism dotted throughout the album, being that I’m still pretty much an irresponsible child, but there’s more of a balance there. My worldview has cemented itself somewhat, there’s less confusion on this record. It’s not all snot and vodka anymore, there’s a far wider range of bodily fluids and expensive liqueurs at work.”

“Every bar I’ve ever written has been provoked by an experience or realisation I’ve had, even at its most surreal my writing is all grounded in reality. There is the most beautiful chaos in the most ordered disgusting aspects of our society, which is often overlooked. Recognising the absolute absurdity and unadulterated weirdness entrenched in every experience I have definitely keeps me happy… very happy. There is a lot of dark imagery at work in this project, but I wouldn’t view it all negatively. It’s the sum of every experience and everything I’ve thought about over the last year and a half. That’s the concept really. Not that that’s a concept.”

On the topic of dark imagery, once again some pretty twisted, but exceptional videos accompany your album singles – and I’m aware that you produced those. Do the end results embody the tunes in the way you’d hoped? And in terms of cross over, have at any points your visual/video ideas inspired your bars as opposed to vice versa?

“Every video I’ve produced has been a massive learning curve. In my head I’m like ‘right all I need is a massive pile of dead flies and a microscope and a giant white room for this bit’. Then as it all develops you realise you have to breed all the flies and rent a microscope from an obscure company and hire giant space age lighting just to make that one scene work. None of them have ended up exactly as I envisioned them at the beginning, but I’m getting there. As for the cross over my bars are all inspired by visual ideas. A lot of sections of verses all begin as images in my head, so I just describe them.”

Looking at UK hip-hop as a whole, do you feel it’s represented fairly in the broader music industry (radio/media etc.)?l

“I don’t really know. I hate thinking about stuff like that. Well I don’t hate it, I just never do. I feel like people that seethe and fume about a lack of exposure or a perceived lack of industry support just aren’t happy with how their career is going and can’t bring themselves to blame their level of proactivity or the quality of their music. I manage to make a decent living and people turn up to my shows so I’m bless. You’ll never catch me stressing out about any kind of broader industry.”

Your album launch will be at Brixton Jamm on Friday 19th December, what should we be expecting? And do you have any anecdotes from previous events that might give us an insight to the kind of night the High Focus crew will be having?

“The whole crew driving tanks. Excess bacteria. Flames enveloping most items. Moderate mortality rates. Nothing festive. Nothing. I’m going to actually plan my set properly so I can play all the new shit I want to play. I’m very hype for it. I can’t think of any anecdotes right now, sorry. But they all end in ‘Needless to say I had the last laugh.’”

What’s on the agenda for the coming months?

‘So We Ate Them Whole…’ is available to purchase in CD format, on limited edition vinyl & digitally over at the High Focus website.

A date for the diary, this Friday catch Jam Baxter and the rest of the High Focus crew at Brixton Jamm (tickets here), details below: 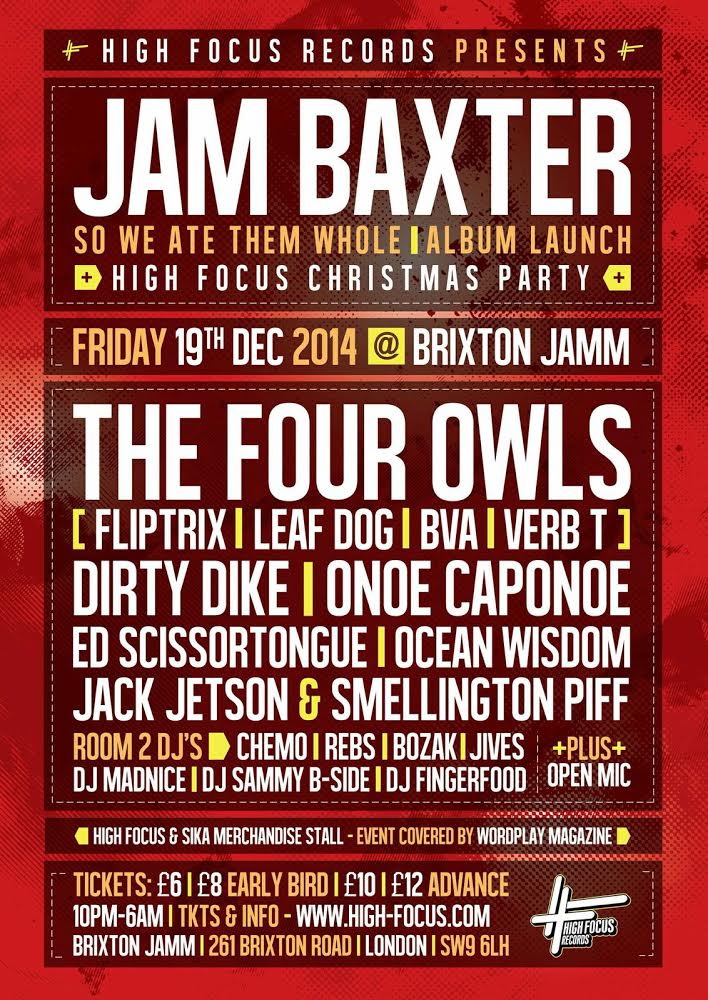